Bernard Buffet (1928-1999) was a prolific French artist who worked as a painter, lithographer, etcher, designer and sculptor. His paintings covered a wide range of subjects, including landscapes, portraits and still-life and religious scenes. Browse our Bernard Buffet paintings for sale here. 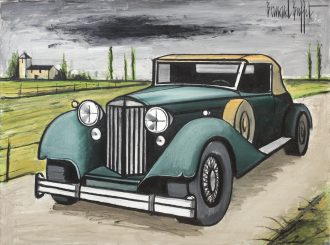 Bernard Buffet was born in Paris in 1928. His career began at a young age, with distinguished academic and professional prominence soon following.

How did Bernard Buffet’s career start?

At the age of 16, early recognition of Buffet’s drawing talent earned him a place at the prestigious École Nationale Supérieure des Beaux-Arts. Within a year, he showed his work at the Salon des Moins de Trente Ans, and by 1947, he was a member of both the Salon des Indépendants and the Salon d’Automne. In the same year, he shared the Grand Prix de la Critique, and by twenty years old, Buffet was already a highly-acclaimed painter.

What was Bernard Buffet’s painting style?

Defined by elongated, spiky forms, sombre colours, flattened spaces, and an overall mood of sadness and despair, Buffet’s early work reflected the misery of post-war France and catapulted him to almost instant success.

Going against the emerging trend of abstraction, Buffet remained an expressionist through and through, accentuating his non-conformist attitude to painting.

Bernard Buffet’s paintings could be said to be a reflection of his own personality: individualistic, elegant, sober, solitary, and melancholy. The harsh and gothic lines that give his work such starkness and tension make it atmospheric, powerful, and instantly recognisable.

How did Bernard Buffet rise to fame?

Capitalising on his immense potential, in 1948, Emmanuel David offered Buffet an exclusive contract with his gallery, shared with art dealer Maurice Garnier. This meeting could be considered the turning point in Buffet’s career, as it afforded him international recognition. His relationship with Maurice Garnier lasted for the rest of his life, comprising no less than fifty-four exhibitions at his gallery, and Garnier continued to work with Buffet’s paintings until his own death in 2014.

By the early 1950s, Buffet lived in a chateau enjoying a life of financial comfort unimaginable just a few short years before, and was rivalled only by Picasso as the most celebrated painter of the modern world.

Buffet was given first place in a poll by the ‘Connaissance’ journal in 1955, which listed the ten best post-war artists. In 1958, he was given his first retrospective, at the age of 30. Over the years, numerous world-wide exhibitions took place, often following a theme – bullfighters, clowns, religion, still life, and others.

In 1974 he was admitted to the Académie des Beaux Arts and appointed officer of the Légion d’honneur, the highest French order of merit.

How did Bernard Buffet die?

In 1999, Buffet, who suffered from Parkinson’s Disease and was no longer able to work, committed suicide in his house in Tourtour aged 71.

What are Bernard Buffet’s notable works?

In 1961, Buffet painted a series of paintings depicting the life of Jesus Christ, intended to decorate the Chapelle de Château l’Arc. Ten years later, at the request of Monsignor Pasquale Macchi (secretary to Pope Paul VI), he offered these paintings to the Vatican Museum where they remain on permanent exhibition.

The artist’s work consists of more than 8,000 paintings as well as numerous printed graphics. He also worked as an illustrator and stage designer. At Willow Gallery, we hold a few original Bernard Buffet paintings for sale, which you can browse above. 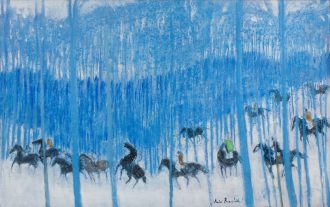