Gustave Loiseau was born in Paris, the son of a butcher. After unwillingly serving an apprenticeship as a decorator, a legacy from his grandmother in 1887 presented an opportunity to fulfill his aspiration to become a painter. After he had finished military service, he gave up his job and dedicated his life to painting. 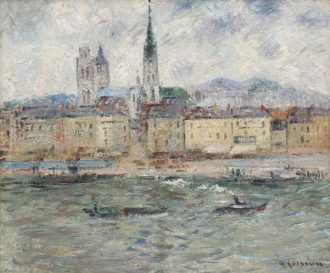 Gustave Loiseau was born in Paris, the son of a butcher. After unwillingly serving an apprenticeship as a decorator, a legacy from his grandmother in 1887 presented an opportunity to fulfill his aspiration to become a painter. After he had finished military service, he gave up his job and dedicated his life to painting. His formal training took place at the Ecole des Arts Decoratifs in Paris and afterwards he joined the landscape artist Fernand Just Quignon (whom he had met during his apprenticeship) in his studio in 1889. Even though Loiseau was fascinated by Quignon’s airy paintings, he was disillusioned by his method of painting a canvas from sketches in his studio. For Loiseau, it was totally implausible that a canvas should not be painted directly from the subject, ‘en plein air’.

In 1890, seeking a location where he could concentrate on his love of landscape painting, Loiseau travelled to Pont-Aven in Brittany, a small village famous as an artist colony. He met Henry Moret, Maxime Maufra, Émile Bernard and other artists of the Pont-Aven School. He also ascertained a great deal from Gauguin who returned to Pont-Aven in 1890 and again in 1894 from Tahiti, but Loiseau’s early work showed a greater debt to Camille Pissarro and Alfred Sisley.

After a period of experimenting with Pointillism, Loiseau found his own vision of rural France. His canvases reveal an interest in creating a more melancholic vision,
avoiding the intense light found in the work of the Impressionists. A renewed aesthetic sense characterized the stylistic path for expression, portraying the world not just by its physical appearance but by its inner realities. Loiseau looked at nature with extraordinary sensitivity. His technique known as en treillis or cross-hatching gave his works a special quality, now recognized as his speciality, defining structure and form with short brush-strokes of broken colour, placing him firmly within the Post-Impressionism movement.

Loiseau returned to Paris and first exhibited at the Salon des Independents in 1893. The leading art collector and primary patron of the Impressionists, Paul Durand-Ruel, put the artist under his contract in 1897. This success enabled Loiseau to travel extensively to discover the regions of France, spending summers in Normandy,
Brittany and occasionally the Dordogne and returning in winter to the Isle-de-France. His paintings are faithful witnesses of his movements. Of particular interest to Loiseau was the effect of changing light and seasons on a scene, and he would return to particular locations time and time again to study and paint them in different conditions, drawing comparisons to Claude Monet.

In his latter years he divided his time between his studio in Pontoise and a new studio in Paris. He painted a series of works of the capital city, and it was there that he died in 1935.

From the end of the 19th century, Loiseau enjoyed great international success, with patrons in the United States and in Europe collecting his work. His paintings are represented in numerous museums, private collections and important galleries in Paris, the Thyssen-Bornemisza in Madrid, and the Metropolitan Museum of Art in New York.