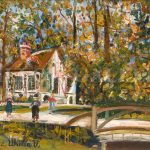 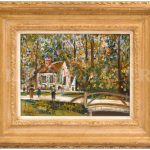 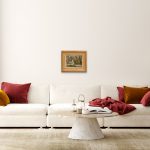 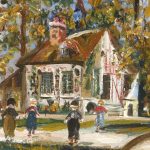 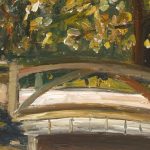 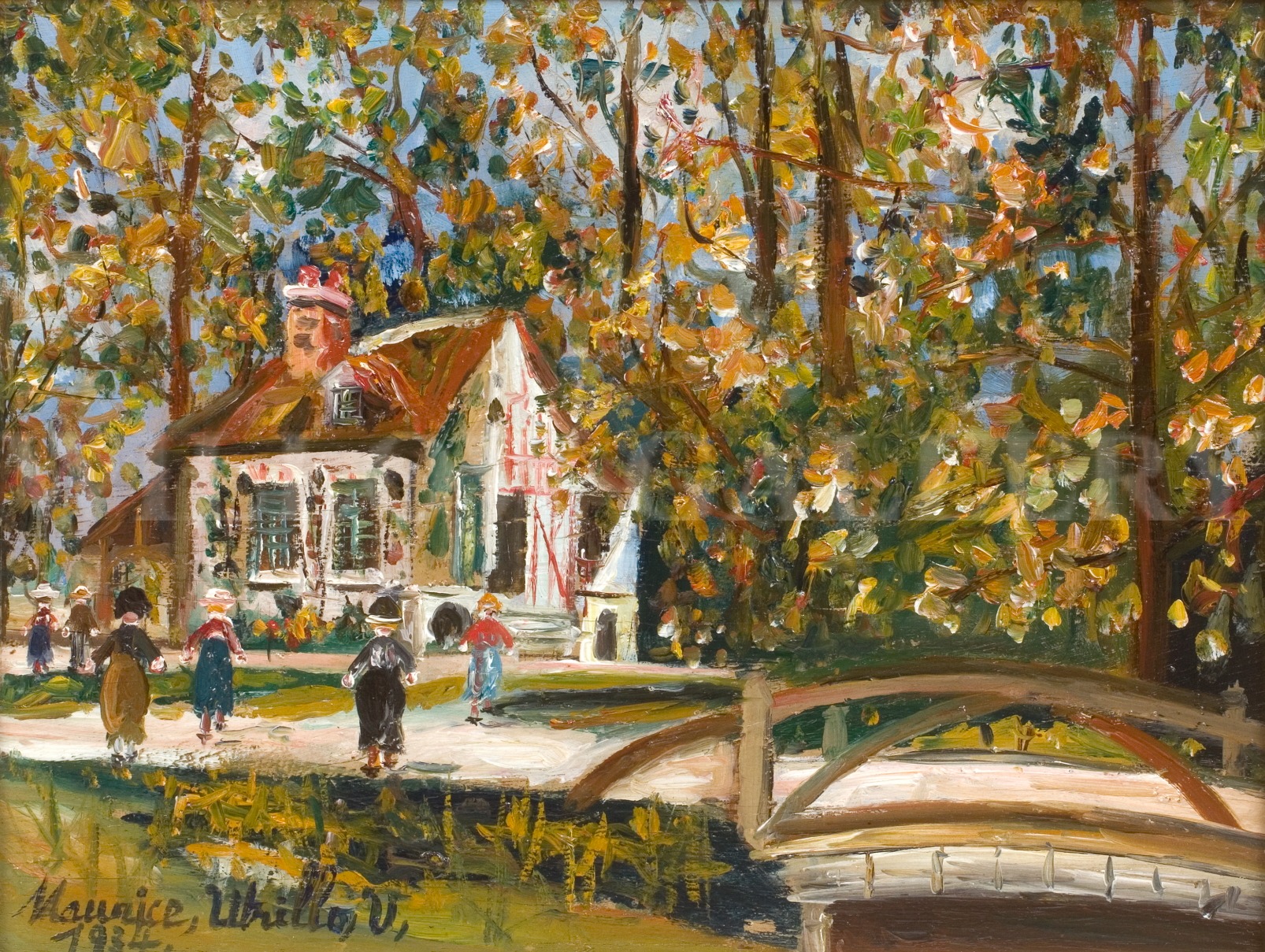 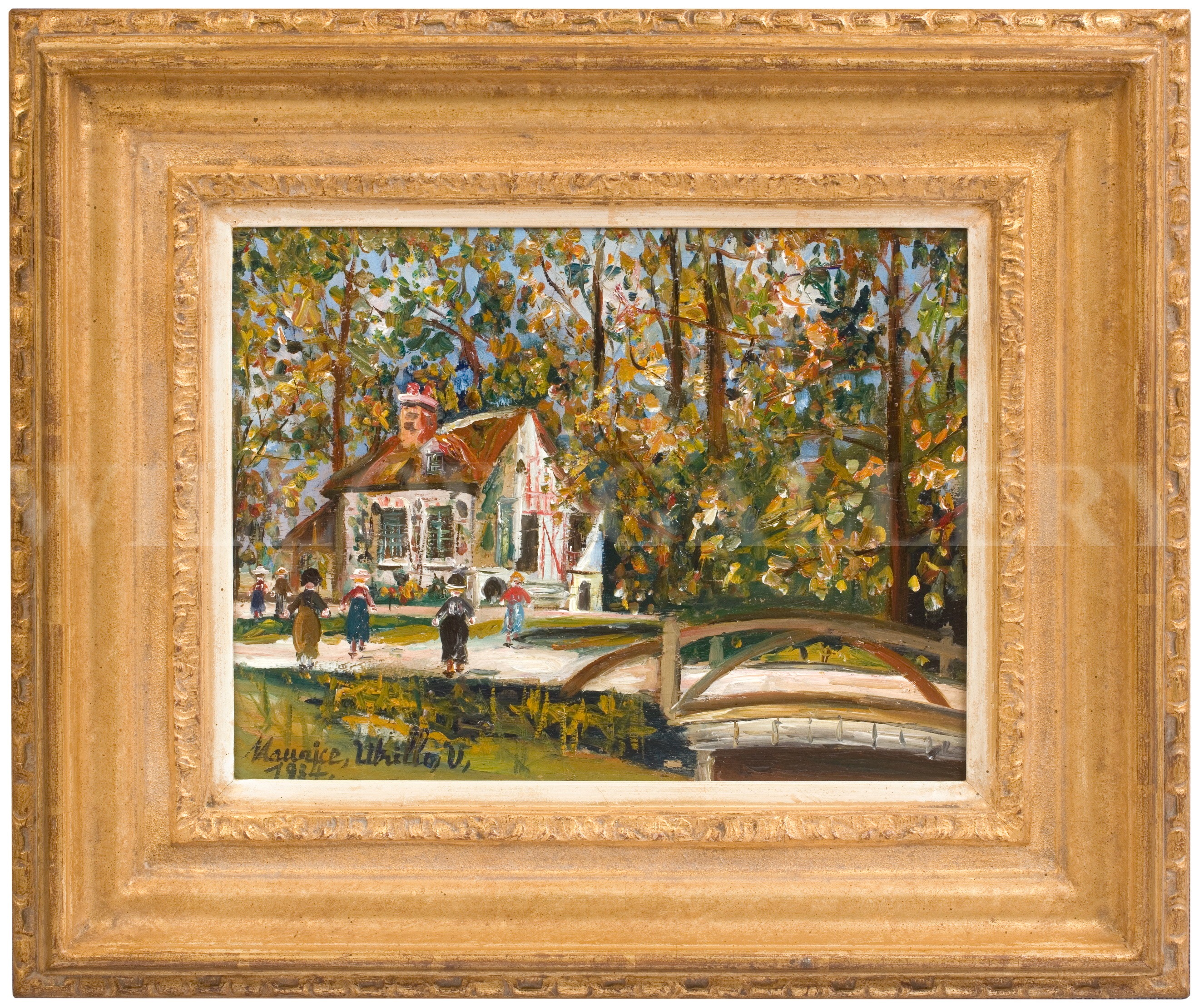 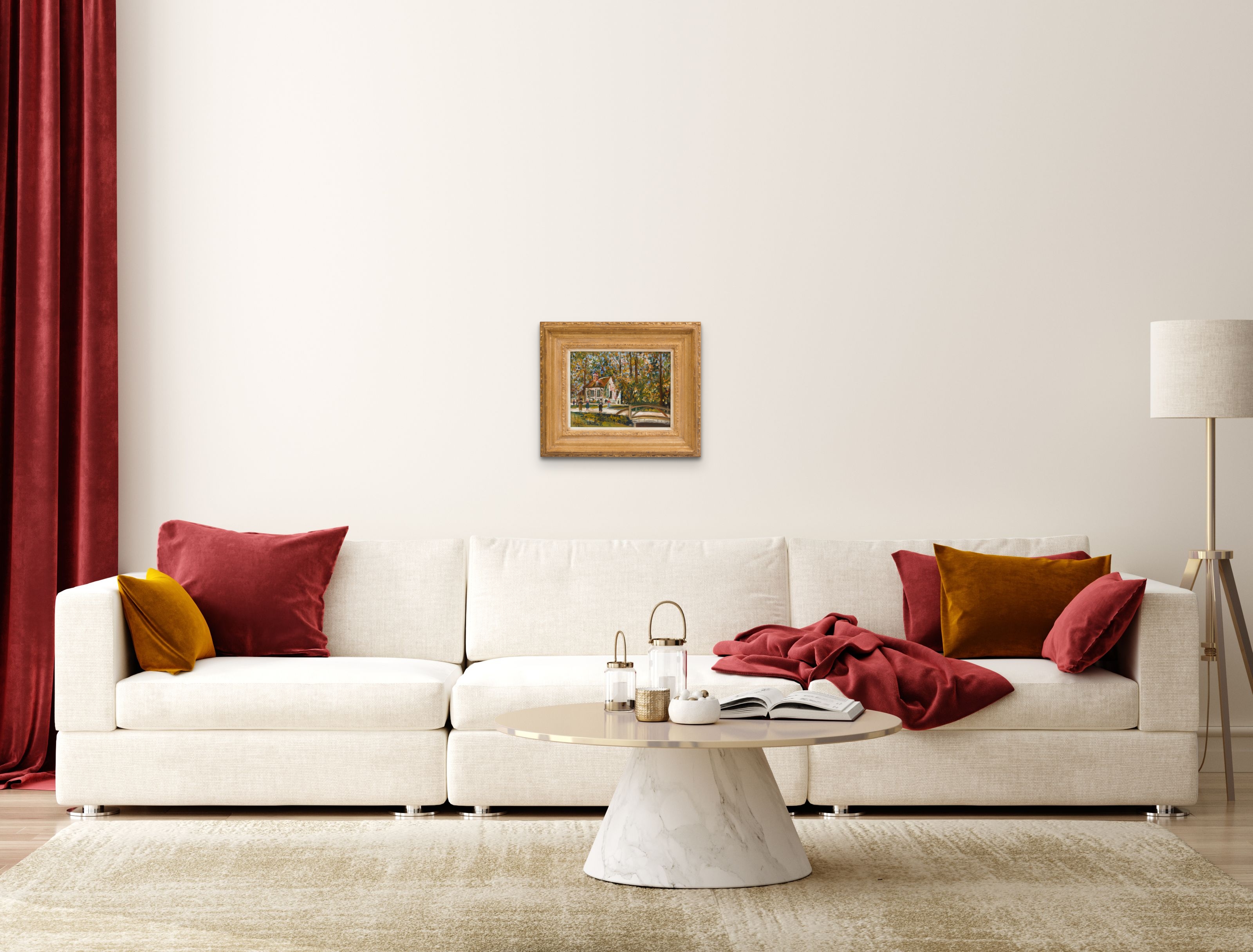 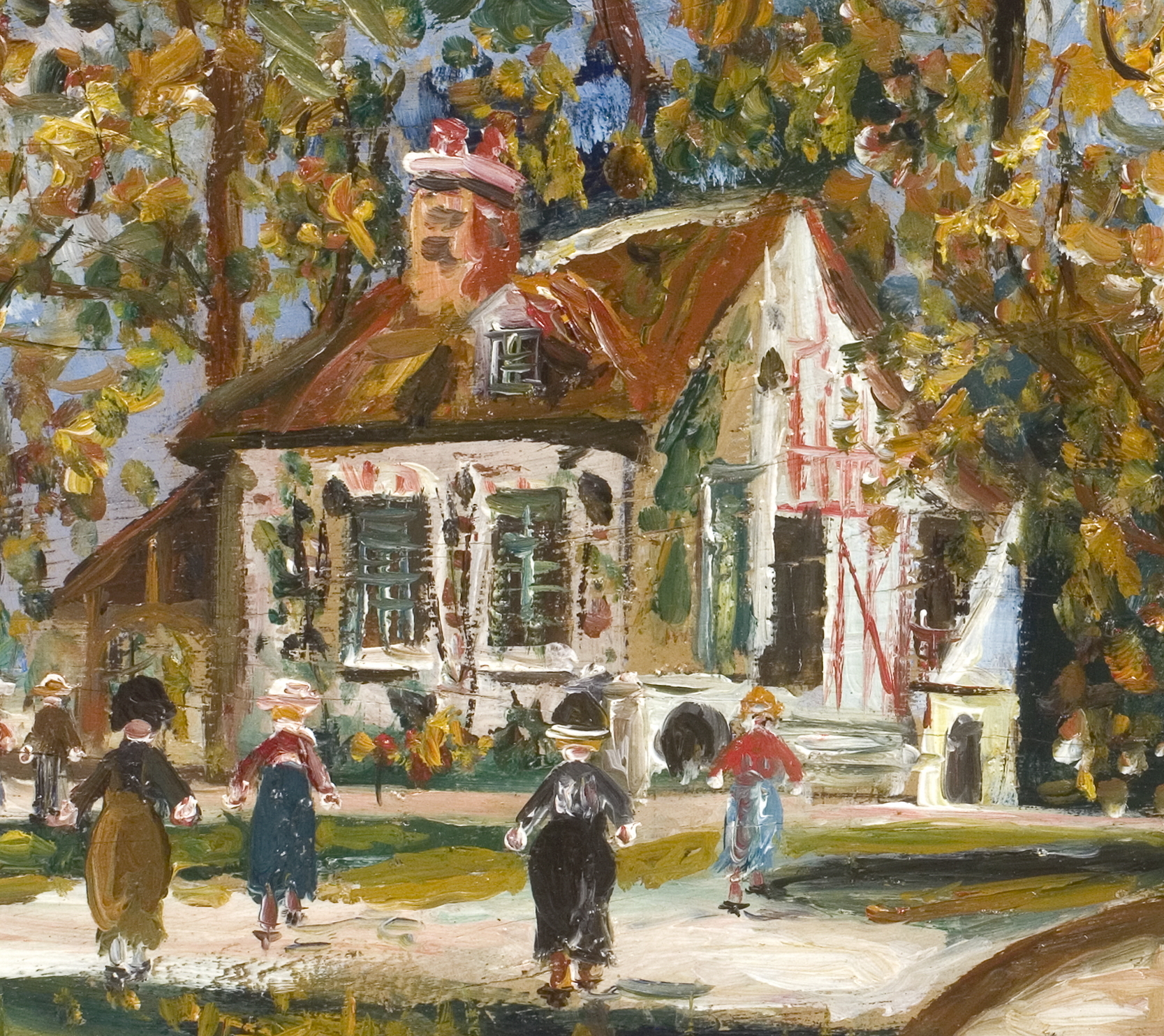 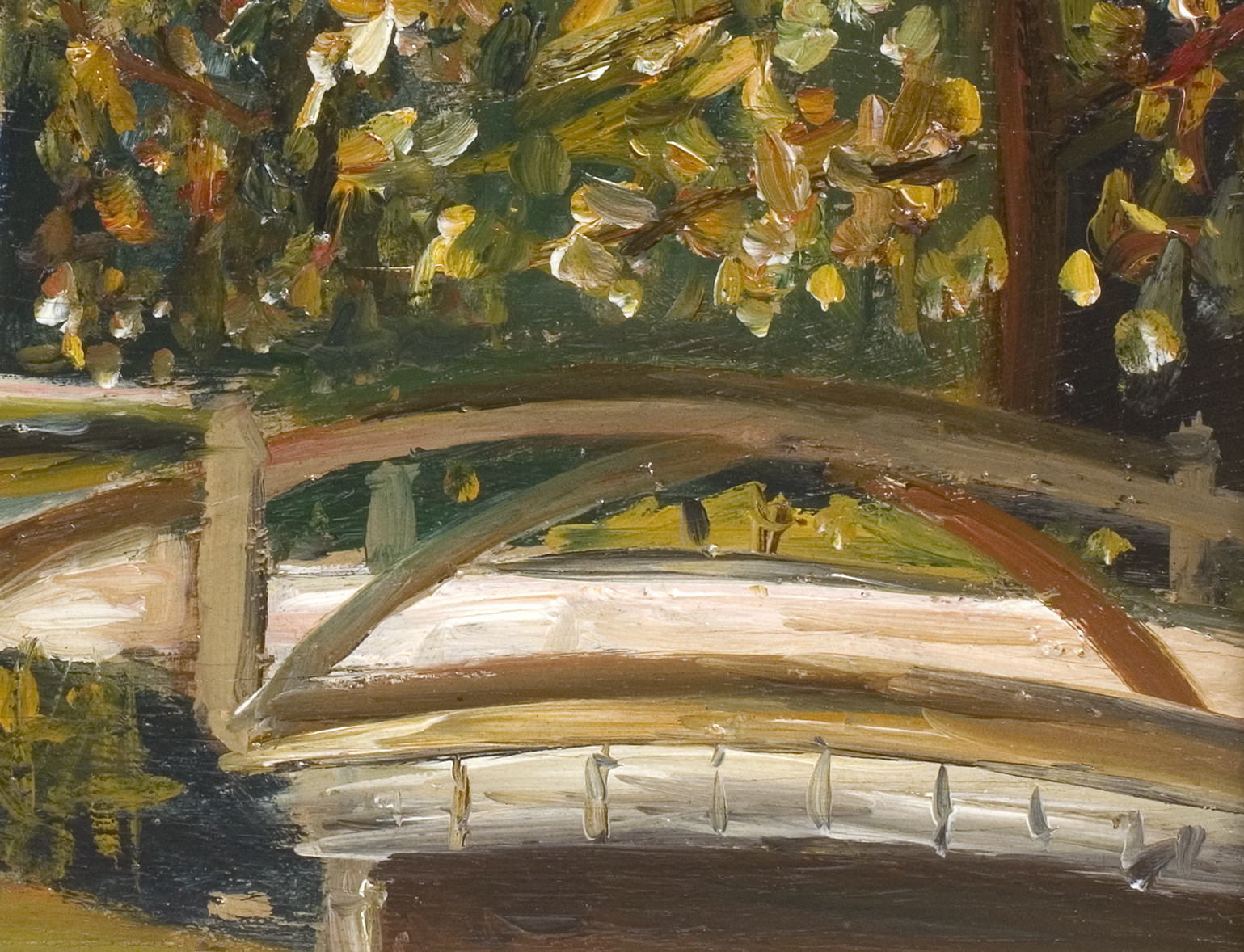 The Petit Trianon was a palace used by Marie Antionette to escape the formality of court life.  In the gardens of the palace she had built a selection of buildings representing an idealised version of rural life, including a farmhouse, dairy, barn, and dovecote.  Such model farms, operating under principles espoused by the Physiocrats, were fashionable among the French aristocracy at the time. One primary purpose of the hamlet was to add to the ambiance of the Petit Trianon, giving the illusion that it was deep in the countryside rather than within the confines of Versailles. The ‘Boudoir’ was the smallest structure of the hamlet, and was nicknamed ‘the little house of the Queen.’  Marie Antionette would retire there herself, or use its intimate setting to entertain small numbers of her friends. 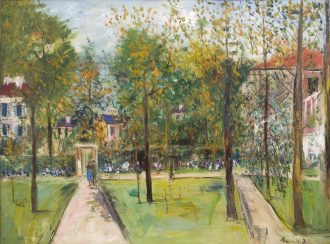 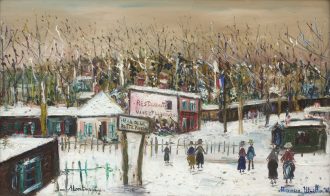 Maurice Utrillo was the son of the artist Suzanne Valadon (born Marie-Clémentine Valadon), an artist’s model. While she never revealed the father of her child, speculation exists that he was the result of a liaison with an equally young amateur painter named Boissy. Other theories involve the well-established artists Pierre-Cécile Puvis de Chavannes or Pierre-Auguste Renoir.

In 1891, a Spanish artist, Miguel Utrillo y Molins, signed a legal document acknowledging paternity, although the question remains as to whether he was in fact Maurice Utrillo’s father.

Valadon’s mother raised the young Maurice while she was building her career, who soon showed a troubling inclination toward alcoholism. When a mental illness took hold of twenty-one year old Utrillo in 1904, he was encouraged to paint by his mother, revealing his artistic talent.

With no training beyond what his mother taught him, he drew and painted what he saw in the Parisian neighbourhood of Montmartre. After 1910, Utrillo’s work attracted critical attention, and by 1920 he was internationally acclaimed. In 1928, the French government awarded him the Cross of the Légion d’honneur.

The medium Utrillo used was oil paint, and he produced thousands of pieces. He is known for urban landscape scenes of Montmartre, especially during his ‘white period’ from 1909-1914, when he painted using plaster and white zinc to reflect the texture of the ageing buildings and cracked walls in the area. Due to his social awkwardness, he rarely ever painted people, and even his cityscapes were often drawn from tourist postcards.

Although his main body of work was from the 1900s, he’s often compared to 18th century artists such as Francesco Guardi, Hubert Robert, and Camille Corot. Today, Utrillo’s works are exhibited in the collections of the Musée d’Orsay in Paris, The Museum of Modern Art in New York, the Tate Gallery in London, and the Hermitage Museum in St. Petersburg.

Utrillo was very active, painting many striking works throughout his tumultuous life. However, some of his paintings are particularly notable. Le Moulin de la Galette, for example, is considered his most famous work. It features a quiet scene of Montmartre, with the bright white walls created using his technique of combining white zinc and plaster. The windmill shown — the Moulin de la Galette itself — was a gathering place for the Parisian Bohemians and artists. The calming atmosphere represents the comfort Utrillo found in the location.

La Porte Saint-Martin, which is located at the Tate Modern in London, is also a well-known piece from the artist, highlighting a 17th century arch that was erected in honour of Louis XIV. Using an impasto application (where the paint is very thick in places, creating depth and texture), Utrillo painted this architectural marvel from a postcard, as he often did. He even used the same postcard again in another painting about 20 years later.

Other notable works from Utrillo include Impasse Cottin, Lapin Agile, and Rue des Abbesses. Willow Gallery has a selection of some of the artist’s most quintessential works for sale.

Throughout his life, Utrillo’s mental disorder would result in his being interned in mental asylums repeatedly. At middle age he became fervently religious and in 1937, at the age of fifty-four, he married Lucie Valore and moved to Le Vesinet, just outside of Paris.

Although his life also was plagued by alcoholism, he lived well into his seventies. Maurice Utrillo died on 5 November 1955, and was buried in the Cimetière Saint-Vincent in Montmartre.