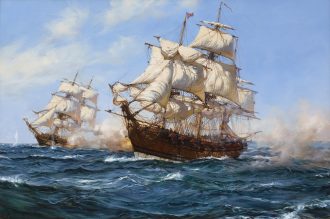 Sir William Russell Flint was born in Edinburgh in 1880, son of the artist and illustrator Francis Wighton Flint. He received his formal training at the Royal Institution School of Art in Edinburgh and served a six-year apprenticeship as a lithographer and designer. At the age of 20 he moved to London to work as a medical illustrator. Three years later he began working as an illustrator for the Illustrated London News. As a result his work quickly gained recognition throughout Britain.

In 1912 Sir William Russell Flint moved to Italy, but his idyllic life as a freelance artist was interrupted by the onset of World War One. He joined the Royal Navy Air Service where he became Admiralty Assistant Overseer – Airships. After the war, Flint travelled to France and Spain. It was during this period that his work became more widely recognised and in 1924 he was elected Associate of the Royal Academy, becoming a full member in 1933. In 1936 he was made President of the Royal Society of Painters in Watercolours.

He moved back to London and in 1947 he was knighted. The Royal Academy staged a retrospective exhibition of his work in 1962 and he continued painting until his death on 30th December 1969 at the age of 89.

His work is displayed in galleries and museums throughout the world, where it continues to give pleasure and enjoyment to those who admire his extraordinary talent.