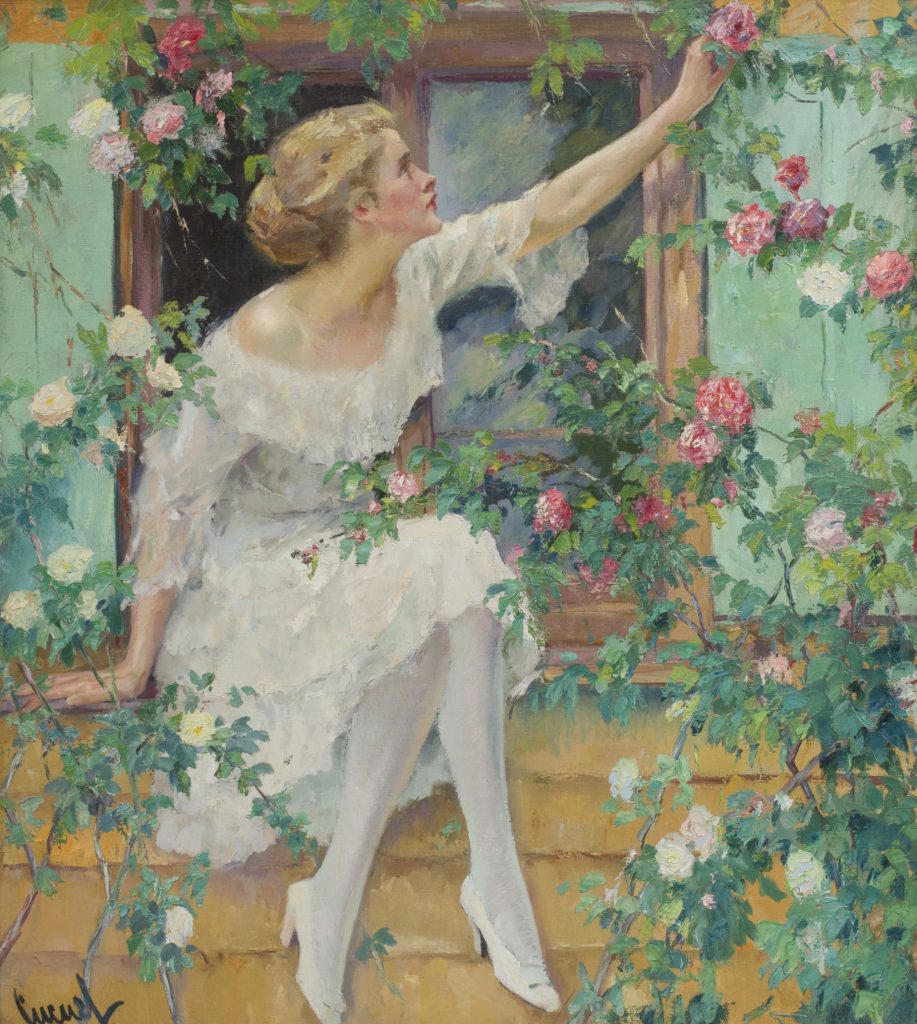 Edward Cucuel was a San Francisco-born American illustrator and landscape painter. He attended the local academy of arts at the early age of fourteen. Three years later, after a short time working as an illustrator at ‘The Examiner’ newspaper, he moved to Paris.

Cucuel attended the Académie Julian and the Académie Colarossi, later studying under Gerome at École des Beaux-Arts. In 1896, Cucuel went back to the USA but he soon returned to the French capital and worked as a freelance illustrator.

After two years in Paris, he travelled through Europe to study the old masters, settling in Germany in 1899, and working as an illustrator in Leipzig and Berlin. These were fruitful years for Cucuel’s career, producing artworks for several papers and books in Germany, as well as other publications all over Europe, including the Illustrated London News.

Ever the curious traveller, in 1904 Cucuel decided to take a trip around the world. After reporting on the World Fair in St Louis, he went on to Japan, China, Sri Lanka, and the Mediterranean before returning to Paris. After a final trip to San Francisco in the wake of the earthquake in 1906, he returned to Munich. Aged thirty-one, he was ready to take stock of his life and career and decided to concentrate on painting.

Initially, Cucuel was heavily influenced by the early German Expressionists. He joined the artists’ group ‘Die Scholle’, which was dominated by the leading artist Leo Putz and participated in the exhibitions of the ‘Secession’ in Munich.

Cucuel’s association with Putz caused him to adopt a more Impressionistic style, which combined with his love of Expressionism led to his distinctive imagery. Putz and Cucuel spent five summers living by Chiemsee Lake in Bavaria, where they painted nudes ‘en plein air’ — this set the tone for his later works.

In 1912, Cucuel successfully exhibited some of his works in Paris, one of which, ‘The Tub’, was also exhibited in Pittsburgh, Chicago, Detroit, Toronto, and New York. The following year, he became a member of the prestigious Société Nationale des Beaux-Arts artist group, and showed some works at the famous Salon d’Automne exhibition. In 1915, his paintings were displayed at the Expo in San Francisco.

During World War I, Cucuel lived in Holzhausen by Lake Ammer and later owned a similar place at Lake Starnberg and a number of studios in Munich. He used the sweeping waves of the lake to enhance the sensuality and appeal of the young beauties that he portrayed, very often depicted alongside boats, flowers and trees.

In 1921, a group exhibition at the Howard Young Gallery in New York which featured his paintings led to the New York Press garnering some enthusiasm for his art. As a result, in the following year, the Grosvenor Gallery and the Fine Arts Society in London, the Walker Galleries in Liverpool and the Birkenhead Museum exhibited his art. Exhibitions in the Netherlands, Sweden and Denmark further established his immense popularity.

In the mid-twenties, he went back to New York, but returned to Germany each summer. However, the outbreak of World War II forced him to leave Germany permanently. Cucuel settled in Pasadena, California, where he remained until his death in 1954.

Where can I find Cucuel’s works today?

His work is represented at the Carnegie Institute in Pittsburgh; the Art Institute, Chicago; the Detroit Museum of Arts; the Toledo Museum; Rochester Museum in Toronto; the National Academy, New York; and many other important institutions. The painting “Das Picknick” is still part of the collection at the Williamson Art Gallery and Museum in Birkenhead.

Willow Gallery offers a selection of original Cucuel paintings for sale for anyone interested in investing in his outstanding work.