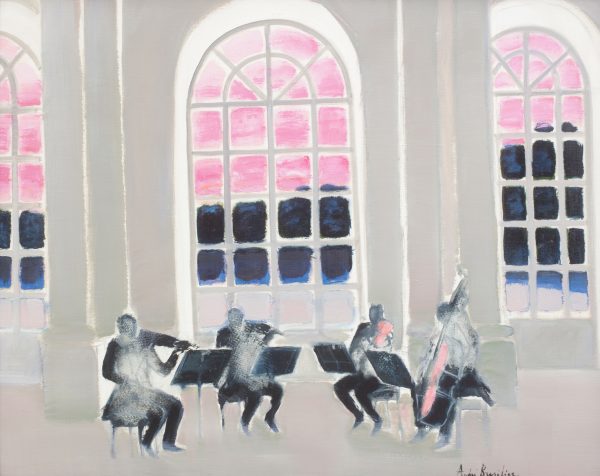 Vancouver, Galerie Buschlen-Mowatte, In Search of the Invisible, 1988, illustrated in the catalogue p. 16-17 André Brasilier is a French painter and printmaker whose work is typified by a breezy lyricism, wherein real-life subjects are transposed into dreamlike settings. Brasilier’s images portray a peaceful world, with delicate compositional and color harmonies bathed in soft, cool light. He takes significant aesthetic and philosophical inspiration from Japanese prints, with his paintings often featuring pastoral scenes, musical instruments, the sea, women, and horses.

Born on October 29, 1929 in Saumur, France to an artistic family where both of his parents were painters, Brasilier attended the École des Beaux-Arts at the age of 20. He had his first retrospective of 100 artworks from 1950-1980 at the Château de Chenonceau in 1980 and had another retrospective exhibition at the Musée Picasso-Château Grimaldi in Antibes (French Riviera) in 1988. He has also had further major retrospectives at both the State Hermitage Museum in St. Petersburg and the Museum Haus Ludwig für Kunstausstellungen Saarlois in Germany. Over the years Brasilier has held numerous exhibitions all over the world, including in France, Germany, Japan, Switzerland, Canada, United States, Russia, The Netherland, Korea, and Hong Kong. Brasilier continues to live in Paris, France.